Develop Your Character
Read your witness statements. . . .
forward, backward, upside down and backwards
You can't have any notes.

"Think in Character", cont.
As you write your biography. . .

You begin to think in three dimensions, your character is becoming a real person?
. . . seeing in color instead of in black and white. . .

Next, talk about yourself (the character) out loud.
Get parents and friends involved.
Nimoy, "The more I cloaked myself in the character, the more I became the character."
Look in the mirror and say "I am you."  "You are me."


Courtroom Basics
Dress appropriately
Sit in order of appearance.
When introduce yourself -- spell your name.
Remain standing until the whole team has introduced themselves.    Where do witnesses sit?
"Good evening, you honor. . . . "
Sworn in speak clearly "Yes, I do."
Sit up sraight, don't swivel
Speak up.

Look at judge for explanations
short answers, can look at attorney -- if one-on-one
Always, "Yes, your honor"  "No, your honor."
Stay in character.

If the judge asks you a question, don't panic, you have an answer.


Witness #1
During direct
Know the questions our attorney will be asking.
Practice with your attorney
Appear confident
Make sure you do not have any inconsistencies in your testimony

For all, get the information from the witnesses in your examination

Witness #2 -- qualifying an expert witness
During Cross
anticipate questions that will be asked and prepare answers
act confident
always speak loud and clear
be responsive
listen and think before you respond (not too long, but do not rush)
only give the facts as you know them
don't be defensive  be confident,  appear truthful

Basic Witness Info
statements are voluntary -- sole source of information
cannot be questions on anything you have heard in court or is contained in another personal statement
"lack of personal knowledge."

Attorneys need to protect your witness.

Rules for Witnesses
you cannot use notes
all witnesses must be called -- watch your time
don't waste time
witness statements are the statements given to the police
witnesses may be impeached
witnesses may NOT use costumes, Inappropriate attire or makeup or props
normal speaking voices -- no ethnic or unrealistic accents
Do NOT use a monotone voice


Attorneys can ask for a time check.


Rules for Witnesses
Use normal voices. . .  DO NOT USE MONOTONE.

The defendant is on trial for the murder of Beverly Hills actress Sandra Stiff
Valid Question?
or
Objection Your Honor?

State your name
state your profession if any

Where did you happen to be on the evening of December 31st 2009?

Were you personally acquainted with the defendent?
Please tell us when you arrived at Sandra's party?
Did you happen to notice whether or not the defendant ever arrived at the party?
Isn't it true that the defendant had his eye on Sandra all evening?  (speculation?  Leading? )
What, if anything happened while you were at the party?
What did you hear? (hearsay)
What happened next?
What startled you? (after her testimony. . . )
Did you dial 911?
What else did you observe, if anything?
Tell us what you think Sandra was trying to tell you?  (speculation)
While you were with Sandra did you see anything that looked like a potential weapon?

Direct of the expert witness

State your name
By whom are you employed
Did you do the autopsy on Sandra Stiff?
When you did the autopsy, did you have any idea what you were doing?  (argumentative)
Do you enjoy your work?  (relevance)
What did the guests at the party say about the time of death?  (hearsay)
Could you tell us the approximate time of death?
Tell us why somebody would want to kill Miss Stiff (speculation)
What did you find as a result of the autopsy thea was performed
How can you expect the judge to believe that?  (argumentative)  (Objection, counsel is being argumentative.)
Doctor, if you can, be more specific about the cause of death
Please, if you could, describe some of the charahcterics of cynide poisoning
Isn't it true that your evidence points to the Defendant?  (leading)
What evidence, if any, did you personally obtain linking the defendant to the death. . . . .


Red Flag Words
I think, I feel, I believe -- speculation, opinion -- improper
could, would, should
hear, said, tell

beyond the scope of cross

We learned about introducing evidence (physical evidence).  See page 24 - 25 in this handbook:


On Monday, November 21,  our group will be
photographed during B3.
Wear regular school clothes, but do look good!
Posted by Ms. D. at 2:53 PM No comments:


We began looking at a Mock Trial assault case from 2013.  We will use this to learn about mock trial and to practice preparing a case.

You can find the case at http://www.lawrelatededucation.org/images/stories/Mock_Trials/2013MockTrialCase.pdf

You need to turn in your applications right away.  We will be deciding this week whether we have enough students participating to continue Mock Trial for this year.

Today:
More on Objections!
Take out your chart of objections.
Reread the excerpt on the back.

http://criminaldefense.homestead.com/condensedobjections.html
Posted by Ms. D. at 9:27 AM No comments: 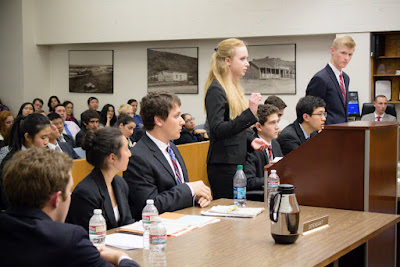 We will discuss what Mock Trial is and look at basically how one works.
Handbook PDF, PDF pages 20-25, handbook pages 11-16.
http://www.lawrelatededucation.org/images/docs/Handbook.pdf
https://www.youtube.com/watch?v=KXYrpLRhQlI
Last time we watched Opening Statements -- to 28:00.
Your Assignment from last time:  Learn the order of the proceedings.

We will discuss what Mock Trial is and look at basically how one works.

Today we watched Opening Statements -- to 28:00.
Assignment:  Learn the order of the proceedings.

Next time:  Activity for order of proceedings.
Name tags
Small treat
Turn in applications if you have them filled out.
Examining witnesses


I.  Read through this material

An attorney goes through eight steps in introducing physical evidence in a trial:
Before the trial:
During the trial:
Example:
1.  Identify exhibit:
"Your Honors, I would like to refer to this hair which has been marked as Defense's Exhibit A."

2. Show Opposing Counsel
3. Ask permission to approach the witness.
4. Show witness:
"Baby Bear, do you recognize this hair which is marked as Defense's Exhibit A?"

6. Ask the crucial question:
"This hair does not match the hair on Goldilocks' head, does it?"
7. Request admission of the exhibit:
"Your Honor, I offer this hair for admission into evidence as Defense's  Exhibit A and ask the court to so admit it."

Attorney's work with your witnesses and/or write questions.


This is the PowerPoint we watched today:
Mock Trial Objections.ppt 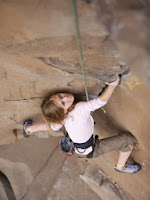 WHAT IS A DIRECT EXAMINATION?


PLAINTIFF/PROSECUTION CALLS WITNESSES THAT SUPPORT THEIR THEORY OF THE CASE*.   IN A UTAH MOCK TRIAL EACH SIDE HAS 3 WITNESSES. ALL THREE WITNESSES MUST BE CALLED. YOU MAY NOT RECALL A WITNESS ONCE HE OR SHE HAS LEFT THE STAND.

AFTER THE PLAINTIFF RESTS THEIR CASE, THE DEFENSE CALLS THE WITNESSES IN THEIR FAVOR. THIS IS THEIR WITNESS.  TOGETHER THE WITNESS AND THE ATTORNEY WHO WILL ASK THIS WITNESS QUESTIONS HAVE CREATED A "SCRIPT" OR QUESTIONS THAT ASSIST WITH THEIR THEORY OF THE CASE*.

Your THEORY OF THE CASE* is what your side is saying happened.   It is a theory, and you are doing all you can to prove it.

CREATE THESE  direct examination QUESTIONS FROM THE WITNESS STATEMENTS IN YOUR HANDBOOK.
CHOOSE YOUR WITNESSES WISELY. TAKE INTO CONSIDERATION THE PERSONALITY OF YOUR STUDENT AS WELL AS THAT OF THE HYPOTHETICAL WITNESSES. THIS PERSON MUST BE A GOOD ACTOR/ACTRESS, BUT ALSO BE ABLE TO HANDLE TOUGH CROSS EXAMINATION BY THE OPPOSING TEAM.


WHAT MAKES A DIRECT EXAMINATION GOOD?

THE GOAL IS TO TELL A STORY THROUGH THIS WITNESS ABOUT IMPORTANT FACTS REGARDING THE CASE.

MAKE THE WITNESS SHINE -- LOOK BELIEVABLE AND HONEST. STICK TO THE TRUTH.
THE ATTORNEY SHOULD LAY PROPER FOUNDATION. THIS MEANS ASKING QUESTIONS IN WHAT I CALL "BABY STEPS." ONE IDEA LEADS LOGICALLY AND SEQUENTIALLY FROM ONE IDEA TO THE NEXT.
NOT LAYING PROPER FOUNDATION WILL RAISE OBJECTIONS FROM THE OPPOSING TEAM.

KEEP QUESTIONS SHORT AND TO THE FACTS CONTAINED WITHIN THE WITNESS STATEMENT. AVOID LONG-WINDED NARRATIONS. DO NOT ASK QUESTIONS THAT CALL FOR IMPROPER OPINIONS OR STATE CONCLUSIONS.

DO NOT INVENT INFORMATION OR FACTS. YOUR STORY WILL BE BROKEN UP BY OBJECTIONS FROM THE OTHER TEAM. YOU MAY ALSO BE PENALIZED BY THE JUDGES FOR GOING OUTSIDE THE SCOPE OF YOUR WITNESS STATEMENT.

FOCUS ON THE 3 OR 4 KEY CONCEPTS AND/OR EVIDENCE YOU NEED FROM THIS WITNESS. GET THOSE IDEAS OUT OF THE WITNESS' MOUTH WITH GOOD FOUNDATION AND OPEN-ENDED FACTUAL QUESTIONS. THEN SIT DOWN.

WHEN ENTERING EVIDENCE SUCH AS A GUN, CONTRACT, ETC, BE SURE TO FOLLOW THE PROPER PROCEDURES OUTLINED IN THE MOCK TRIAL HANDBOOK. PRACTICE!!

REMEMBER, THE ATTORNEY'S ROLE IS TO ASK QUESTIONS AND NOT TESTIFY!
WITNESSES, GET INTO YOUR CHARACTER. BECOME YOU CHARACTER. TAKE THE WORDS IN YOUR STATEMENTS AND MAKE THAT PERSON A "LIVING" PERSON.

Start this one at about 25:15 to hear the opening statements and beyond.

Our Competitions this Year 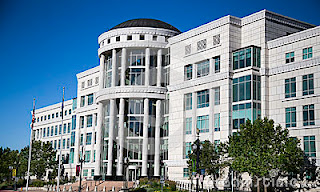 Rules to Take Note Of


Courtroom Dress and Conduct of Participants
a. No costumes or props for witnesses will be allowed.
b. Judges will not score lower for attire worn, but team members should be aware that appearance creates an impression and should dress accordingly.
c. Remember, no gum chewing, food, drink (water only), or unruly or loud behavior is allowed in courtrooms.
Posted by Ms. D. at 10:29 AM No comments:

Welcome to our Mock Trial Blog.

Welcome. If you'd like to find out more about Mock Trial, contact Ms. Dorsey.
You can learn more about the state-wide program in which we participate by going to
http://lawrelatededucation.org/programs/mock-trials